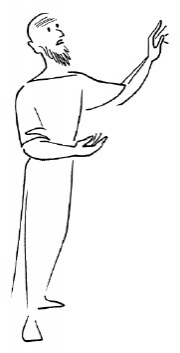 rom your midst, from your brethren. Him you shall hear… I will raise up for them a Prophet like you from among their brethren, and will put My words in His mouth, and He shall speak to them all that I command Him. And it shall be that whoever will not hear My words, which He speaks in My name, I will require it of him.

OK, this post will have a short life today as I forgot to put it up yesterday.

Even so, it’s too worthwhile to ignore.

We know with absolute certainty that Simeon was a prophet. He knew that Christ’s mission would cause Mary grief and that Jesus would draw Gentiles to himself—not just the Jews. Those are two of his prophecies recorded in Luke that came to fruition. But there were others in the short passage. And likely, based on his close walk with God, he prophesied other things that Scripture didn’t mention.

So knowing that the Messiah would be a prophet had to speak to him on a deep level. The Christ was like him in this way. Like him, but not fallible. Like him, but incapable of error.

When Simeon reviewed the words of Moses, he probably liked that his Messiah would be a prophet like him. Seeing where we are like someone we admire usually helps us grow and do what God calls us to personally.

But in modern terms, we need to understand what being a prophet means. Usually when people hear the word, they think of someone who predicts the future. And yes, that can be a component of prophecy. But the original word means something closer to the word ‘truth’ than ‘future’. Basically, a prophet was someone who proclaimed God’s truth. If it meant Elijah telling Ahab that he was sinning, that was prophecy just as much as saying no rain would come for three years.

So it makes sense that the Jesus, our Redeemer, was a perfect prophet. As He himself said, I am the Way, the Truth, and the Life. (emphasis added)